Review: The Song of the Quarkbeast by Jasper Fforde 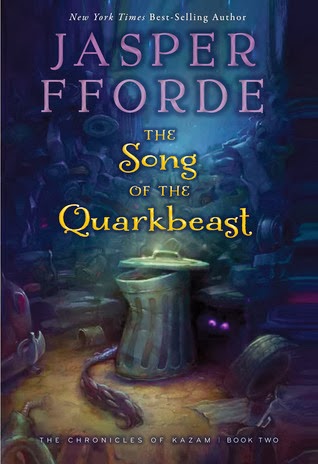 ——
Long ago, magic began to fade, and the underemployed magicians of Kazam Mystical Arts Management have been forced to take any work their sixteen-year-old acting manager, Jennifer Strange, can scare up. But things are about to change. Magical power is finally on the rise, and King Snodd IV of the Ununited Kingdoms knows that he who controls magic controls everything. Only one person stands between Snodd and his plans for a magic-grab—and that’s Jennifer.

Yet even smart and sensible Jennifer would have trouble against these powers-that-be. The king and his cronies will do anything to succeed—including ordering a just-might-be-rigged contest between Kazam and iMagic, Kazam’s only competitor in the magic business. With underhanded shenanigans afoot, how can Kazam possibly win? Whatever happens, one thng is certain: Jennifer Strange will not relinquish the noble powers of magic without a fight.
——
It’s a little odd to write a review of the second book in a series without having reviewed the first. Not least because one is then left with the task of trying to fill in enough background information so as to render the review meaningful while simultaneously avoiding the revelation of plot twists from the first book.

Nevertheless, The Song of the Quarkbeast is just too damn good not to write about, so I’ll do my level best not to spoil The Last Dragonslayer for anyone who hasn’t read it. (And if you haven’t, you really, really ought to get around to it one of these days. Preferably as soon as possible. Right now, in fact.)

The Chronicles of Kazam take place in a alternative version of our world where neither geography nor countries are quite the same, and where magic was once prevalent but has since fallen due to a waning of the amount of wizidrical energy (aka “crackle”), ambient magical power that practitioners draw upon for their spells. Jennifer Strange is a foundling, orphans or children of unknown parentage who are left in the care of the Covenant of the Blessed Ladies of the Lobster until they’re old enough to become indentured labor (10-12ish) until the age of 18. The life of a foundling isn’t easy—hard work, discrimination, limited rights—but Jenny is lucky enough to be in the service of the Great Zambini, a genuinely kind wizard and head of Kazam who takes Jenny under his wing and becomes a surrogate father. Unfortunately, prior to the events of The Last Dragonslayer, Zambini vanishes in a magical accident, leaving Jenny acting head of Kazam in control of a host of whackadoodle past and present magic practitioners with a corrupt king (and as it happens, an unscrupulous wizard of legend) eager to ruin them all for personal and monetary gain. Cue adventure and general madness.

There are so many amazing things about these books I hardly know where to begin, but despite the full-throttle twisting plot, the true heart of Kazam is the characters who inhabit it, first among them Ms. Jennifer Strange. Jenny has the stalwart, no-nonsense, wholly practical personality necessary to run an unruly house of eccentric magic users that include the Mysterious X, an amorphous entity who must be protected from the elements by a pickle jar should he venture outside, and they equally inexplicable Transient Moose.  She makes mistakes, but she has no compunction with holding herself responsible and is more than capable of performing her job. She is brave, loyal and wholly sympathetic—which is good, since she’s the first-person narrator.

Jenny is joined by Tiger, her fellow foundling and apprentice, who quickly becomes both surrogate younger brother and capable second in command. Their biggest ally among the denizens of Kazam is the Youthful Perkins, a wizard-in-training who is Jenny’s age and whose life’s ambition seems to be earning his certification and getting Jenny to agree to go on a date. (His initial chances are best summed up by the following excerpt:

“I like him, but since his particular field of interest was Remote Suggestion—the skill of projecting thoughts into people’s heads from a distance—I didn’t know whether I actually liked him or he was suggesting I like him, which was both creepy and unethical. In fact, the whole Remote Suggestion or ‘seeding’ idea had been banned once it was discovered to be the key ingredient in promoting talentless boy bands, which had until then been something of a mystery.”)

It would take too long to detail the whacky assortment of magic users, shady politicians, and mad, formidable nuns who round out the cast of supporting pro and antagonists (Wizard Moomin, the Price Brothers, “Full” and “Half”, Lady Mawgon, and the King’s Useless Brother, to name a few), but some deserve mention for their roles in Quarkbeast. The Amazing Blix, head of iMagic and Zambini’s former best friend, emerges as primary antagonist while the Once Magnificent Boo, a minor character from Dragonslayer, becomes an integral part of the plot. We even get to see the Queen, infinitely more capable than King Snodd and a far better human being, call her manipulative husband to task in a wholly satisfactory scene. Plus the Great Zambini finally makes an (albeit brief) appearance in the flesh and the Transient Moose steps from the background to the foreground with woeful hilarity. But the best character in The Chronicles of Kazam is also the one about whom I can say the least for fear of spoiling the plot: Jenny’s infinitely loyal quarkbeast, a bizarre magical creature that eats metal, terrifies small children, and generally behaves like a quirky, over-protective, slightly deranged dog who could shred you to bits if it had the slightest interest in mauling humans.

As ought to be abundantly apparent in the preceding paragraphs from the characters’ names alone, The Chronicles of Kazam are written in a tongue-in-cheek style that tends towards humor. Even so, Fforde isn’t afraid to allow both Jenny and his readers to experience the less pleasant emotions or the darker side of Jenny’s world. Though the house of Kazam is a zany haven, the rest of the Ununited Kingdom is horribly corrupt, and it is impossible to forget the adversity Jenny faces from a foundling’s position at the base of the social hierarchy when even in Kazam, which is otherwise her sanctuary, the more prejudiced or irascible denizens try to undermine her. Consequently, this makes it even more enjoyable to watch Jenny and Tiger outwit the baddies and prove their worth, though their triumph is sometimes tempered by sorrow, more so in the first book than the second. Song of the Quarkbeast went a long way towards healing the heartbreak I experienced during the climax of The Last Dragonslayer before resolving that heartbreak in a most brilliant way that was cathartic without erasing the poignance of loss from the first book.

This review is becoming a little too gushing for my liking, so I think I will wrap things up by saying that if you are looking for a fantasy novel that takes itself seriously, neither The Song of the Quarkbeast  nor The Last Dragonslayer is for you. If you’re looking for fun, sarcastic, witty adventures with an endearing cast of eccentrics and aren’t afraid to laugh or cry, I cannot recommend this series more highly.

I for one, will be fighting to get my hands on a copy of book three, The Eye of Zoltar, the minute it releases in the UK in April.

Specs
Type: YA Fantasy
Acquisition: Personal purchase from Barnes and Noble. The Last Dragonslayer was a personal purchase from Beaverdale Books, the local indie.
Discovery: Found Dragonslayer while shelf-browsing, bought Quarkbeast the day it came out.
Current Rank: Book that I love
Number of Reads: 2 (Will be read over and over for the rest of my life. Is well on its way to becoming one of my comfort books)

*I’ve marked this as the review whose opinion differs most from my own.