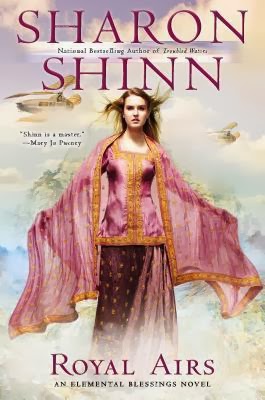 ——
Josetta is a princess of one of the Five Families. But she is far from the throne, so she is free to spend her days working in the poorest sections of the city.

Rafe Adova, an outcast since he was born, lives the life of a career gambler in those slums. He has no ambition other than cheating at the card tables—until the night he decides to help a girl named Corene, who looks like she’s stumbled into the wrong bar.

She, too, is a princess—sister to Josetta, who finds her with Rafe. Josetta has never encountered anyone like him—someone seemingly devoid of elemental blessings—and he fascinates her.

Rafe is drawn to her, though he thinks they are unlikely to ever meet again—but their connection grows strong when she nurses him back to health after he is assaulted by foreign mercenaries. And when they learn the reason he’s being hunted, they know that the truth about his history could endanger not only their love but also their very lives…
——

Cards on the table: The first Sharon Shinn novel I ever read (Archangel) sent me into an uncontrollable feminist rage, a fact that Lauren, the friend who gave it to me, still can’t stop laughing about. I wouldn’t touch the rest of the series and I started asking Lauren more questions when she recommended books. It took a year for me to try another Shinn, Summers at Castle Auburn, but when I did, oh it was glorious. Since then, I’ve read and enjoyed just about everything she’s written, though I continue to pass on that first series and her latest Shape-Changers series. My point is that it would have been a mistake for me to judge Shinn based on one work alone.  This holds equally true for the works that I’ve loved. Had I read Auburn first, it would have left me more willing to try Shinn’s other novels, but I still would have despised Archangel. The fond feelings I have for 80% of her work does not erase the less than positive feelings I hold for the other 20%. I have loved, hated, enjoyed and tolerated her books by turn, depending on the novel.

Royal Airs is the companion to Troubled Waters, one of the four Shinn books that I fell most in love with. But though I enjoyed returning to the world, revisiting characters and following them on new adventures with new faces, Royal Airs lacked that “something” to join the ranks of its predecessor.

Royal Airs follows the exploits of Josetta, a princess who, following certain revelations in the first book, is thoroughly disillusioned with life at court and prefers, now that her presence there is only occasionally required, to dwell in the slums of Chialto running a shelter for the poor, the homeless, and the battered. She’s joined by Rafe Adova, a mysterious character of seemingly humble origins who finds himself drawn into Josetta’s world after he rescues her sister Corene, first because he is intrigued by Josetta and Corene, and because he himself turns out to be the target of would-be assassins, and later because he becomes completely captivated with the prospect of piloting experimental aircraft. His misadventures in the latter prove some of the most engrossing scenes in the book, though his general presence as the newcomer in a cast of familiar characters also offers countless opportunities to view people we thought we knew from an outsider’s perspective. The shape of the world is not quite the same as it was when last we visited Welce, the cataclysmic changes wrought by Zoe, protagonist of Troubled Waters, and major player in Royal Airs, having shifted the balance of power and displaced half the court. Rafe and Josetta help reacquaint readers with those characters whose new stations in life have altered some, including Josetta herself, nearly beyond recognition.

Unlike its predecessor, the story reads more as a romance than a novel of court intrigue, though elements of the latter certainly come into play, despite Josetta’s best efforts to distance herself from that world. I did appreciate that it was Rafe’s life that was endangered, Rafe who needed protecting and rescuing rather than Josetta. In the hands of another author, Royal Airs might have slipped easily into that tired old “damsel in distress” trope that is both worn and infuriating, but Shinn deserves more credit. By and large, her heroines have always been strong, determined women capable of handling themselves, and her definition of “strength” for either gender broader than “good with a sword”. That, along with Shinn’s skill as a writer which prevented her from dipping into the maudlin more than once or twice, took the sting out of most of the novel’s romantic leanings. And while the resolution of the mystery of Rafe Adova was perhaps a little too similar to that of Troubled Waters (and frankly entirely predictable), other elements of the story were more novel. Shinn is one of less than a handful of authors I’ve seen explore autism in a fantasy world, and her handling of it, stark but nuanced for the limited page count the plot allows it, is admirable. Nevertheless, while the book was highly enjoyable (I could scarcely put it down and polished it off on a two hour plane ride), it left me feeling a bit hollow, largely because it suffers by comparison to the first Elemental Blessings novel, Troubled Waters.

Though Royal Airs is not precisely a stand-alone, one could easily follow the plot without having read Troubled Waters. That said, it is better enjoyed if read second, not only because Waters sets up the political climate for its companion, but because Waters performs the brunt of the world-building and most importantly, takes the time to develop characters Airs assumes readers already know. This is the “something” that Trouble Waters excelled at and where Airs fell a little flat. Waters was a slow, thorough character build through plotting that was simultaneously simple and intricate to a cathartic climax and satisfying conclusion. Over the course of the novel you get to know not only Zoe and the other main characters, but also major and even minor characters in what feels like a delicate and intimate way. That feeling is missing from Airs which feels a bit as if it exists solely to unite Josetta and Rafe and set up a third novel following Corene. I am not saying it wasn’t enjoyable, that I didn’t like the new characters, or that there was no plot. Rather that Troubled Waters was complete unto itself and Royal Airs is only half of a story whose conclusion is clearly still to come. As of yet, a third book in the series has not been announced, but with the ending Airs had, it must be in the works.

Specs
Type: Fantasy
Acquisition: Personal purchase from Barnes and Noble.
Discovery: I’ve followed Shinn’s work since I read Summers and Castle Auburn nine years ago. I read and loved the first Elemental Blessings  novel, Troubled Waters and have been eagerly awaiting the sequel since it was announced. Consequently, I bought it the day it released.
Current Rank: Book that I enjoyed
Number of Reads: 1 (Will likely be read again, particularly closer to the publication of the sequel I am sure must be forthcoming)

I was only able to find a handful of bloggers who’d reviewed Royal Airs, and of those none offered anything new to the discussion and rather simply rehashed the plot. Additionally, all were quite brief. In the end, I’ve opted to leave this section blank until more reviews emerge. I will make a note in my weekly “On the Shelf” news post when this section has been updated.
Posted by Rachel at 1:58 PM