When last I blogged (before my job and job-related injury ate my life), I promised reviews of William Nicholson’s Noble Warriors trilogy and Anne McCaffrey’s Harper Hall trilogy. In the intervening time, I have read several other books and discovered that I am not overly inspired to wax poetic or critical about either series. Consequently, I am offering mini-reviews on not only these two trilogies but also V. Briceland’s The Glass Maker’s Daughter to catch up before moving on to other works.

The rocky island of Anacrea is home to the Noble Warriors—the Nomana—an elite band of fighter monks. They have the respect of the community, peace of mind, and seemingly limitless power. Who wouldn’t want to be one of them?

Three young people are determined to join their hallowed ranks: Seeker,whose father wishes he would become a schoolteacher instead; Morning Star, whose mother abandoned her to join the Noble Warriors; and a violent, beautiful river bandit known as the Wildman.

But becoming a Noble Warrior is easier said than done, and these unlikely friends must take great risks to prove they are worthy. On a quest toward their goal, Seeker, Morning Star, and the Wildman get caught up in a bloody and harrowing race to save the Namana—and themselves—from destruction.
——

I read and loved William Nicholson’s Wind on Fire trilogy when I was in junior high and high school. I remember seeing The Noble Warriors on the shelf not long thereafter, but the dustcover descriptions never quite inspired me to pick them up despite my positive feelings for Wind on Fire. I finally picked them up this summer because I was desperate for books with the vibe of the books I used to be able to find before I graduated from college.

I have mixed feelings about Noble Warriors, inescapably colored in part by comparison to Wind on Fire which was both better and my first exposure to the author. It is not that the books aren’t good: They have an intriguing central message/worldview, and three very different protagonists whose experiences illuminate their joint narrative in ways that could not have been achieved if the story was seen from Seeker’s eyes alone. Likewise, Nicholson’s prose remains deft, a number of his descriptions memorable (though not as many as Wind on Fire). The main problem I had, apart from that I’d figured out the course of the overarching plot by the end of Seeker, which is not in itself a failing so long as said plot is executed well, is that Noble Warriors lacks the subtlety of Wind on Fire. Nicholson’s message is a good one, his themes thought-provoking. However, the reader is somewhat beaten over the head with them rather than allowed to experience the thought they ought to provoke.

Specs
Type: YA Fantasy
Acquisition: Personal purchase from Amazon and Half-Price Books
Discovery: Read and loved Nicholson’s Wind on Fire trilogy. Remembered these from subsequent shelf-browsing and returned to them.
Current Rank: Books that I Liked but had Mixed Feelings About
Number of Reads: 1 (Might read again, but probably not more than once or twice)

The Harper Hall Trilogy
By Anne McCaffrey
(Dragonsong; Dragonsinger; Dragondrums)
——
Menolly longs to see a dragon, but even more, she wants to be a Harper—to sing, play, and write the tunes that come so naturally to her. To escape her father’s edict of banishment from singing because she is a girl, Menolly runs away and seeks refuge in a cave. There she becomes friends with nine fire lizards, small relatives of the huge dragons, and teaches them to sing.
——

I had never read McCaffrey before I picked up this trilogy, and while it certainly wasn’t bad, it didn’t quite grip me the way I was told it would. I read the first book, Dragonsong, in one sitting and spent 2/3 of it wanting to throw the book across the room because I was so upset with Menolly’s family. Just thinking about them makes me want to rant. This is not a criticism in and of itself: Menolly’s family is supposed to be hateful, prejudiced, and ignorant. The novel did linger perhaps a touch overlong with Menolly trapped beneath her parents and sister’s insufferable thumbs before she escapes and advances her story, but this is a pacing problem. Menolly’s abuse at her family’s hands is undeniably a defining moment in establishing her character and motivations. I liked Menolly, her music, her bond with the fire lizards, and a number of the secondary characters who wandered in and out of the narrative, but I was disappointed to find that only the first two books followed her adventures, particularly after all the time we as readers spend becoming invested in her personal journey.

It’s difficult to put my finger on where exactly McCaffrey lost me. Ultimately I think it boils down to not finding the books overly engrossing. I’m also not inspired to hunt down the rest of the Dragon Riders of Pern series despite my great and abiding love for dragons. I was far more interested in Menolly than Lessa and the politics of the Weyr which, though only touched very briefly upon in Harper’s Hall, seemed to have far too much to do with sex than I tend to care for. Basically, these books were neither strikingly good nor particularly bad: they were simply mediocre.

Specs
Type: YA Fantasy
Acquisition: Personal purchase from Amazon
Discovery: Stumbled across it while browsing library lists of recommended Sci-Fi/Fantasy novels for new reading material
Current Rank: Books that were Okay
Number of Reads: 1 (Unlikely to reread more than once) 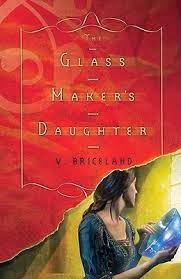 The Glass Maker’s Daughter
By V. Briceland
——
Magic lies at the heart of Cassaforte, medieval city of bewitchments and intrigue. Cassaforte is home to sixteen-year-old Risa Divetri, whose fate is about to be decided by the gods.

Risa has led the sheltered life of a nobleman’s daughter, but soon she plans to leave home to study the family craft—creating enchanted glass objects. When the gods are consulted to determine which school she will attend, the impossible happens: Risa remains unchosen. The rejection sends Risa into a spiral of shame, anger, and confusion. If she’s not meant to be a glass maker, what will she do?

But when Cassaforte’s age-old magic begins to unravel and dark forces threaten the kingdom, Risa’s fiery spirit and untapped powers take her on a perilous journey—one that will lead her to her true destiny.
——
I was with this book until about halfway through when Risa and Milo, her requisite low-born friend from the royal guard and obvious love interest, had unexpected personality transplants that turned Risa from intrepid heroine discovering her strength and self-worth to spoiled girl who needs to be taught, protected, and saved by Milo who can suddenly do no wrong. They started their relationship on relatively even footing, both having misconceptions and prejudices that needed to be corrected as they learned about each other and the way the other half lived. So when the ground shifted almost literally overnight, and the narrative prioritized Milo’s sudden overprotectiveness and impatience at Risa’s need for her father’s approval as right and just while Risa’s independence and desire to find out what’s going on at the expense of her own safety is designated selfish and childish, I was thrown for a bit of a loop. While the characters were initially intriguing, I grew increasingly discontent towards the end of the book, particularly as the direction of the plot became disappointingly obvious. There is nothing wrong with the quality of the prose. Briceland’s narrative style is at once pithy and descriptive. The problem lay partially in the resolution, which left me wishing we’d had more time with Risa, her family, and her skills (among other things), and partially in a feminist discomfort with the narrative that left a bad taste in my mouth.

There are two more books in the Cassaforte series, both with male protagonists, the second of whom is Risa’s younger brother. I own both, and will likely read them at some point, but my mixed feelings about Glass Maker’s Daughter haven’t provided much of an incentive to do so, save the hope that somehow things improve. I try not to judge an author on a single book since literary taste is subjective and even my favorites publish books I don’t care for. I will give Briceland a second chance, but I cannot recommend the first book of Cassaforte without reservations.

Specs
Type: YA Fantasy
Acquisition: Personal purchase from Amazon
Discovery: Stumbled across it while browsing The Book Smugglers’ reviews for new reading material
Current Rank: Book For Which I Have Extremely Mixed Feelings
Number of Reads: 1 (Unlikely to reread)

Second Opinion
(I appear to be in the minority regarding my opinion of this book. Most reviewers seem inclined to agree with Milo regarding the characterization of Risa’s behavior, fears etc., and I have read at least six reviews which categorize the ending as “sweet and fulfilling”.)
The Book Smugglers
Reviewer X
And Another Book Read
Posted by Rachel at 12:21 PM