Review: The Name of the Star (Shades of London Book 1) by Maureen Johnson 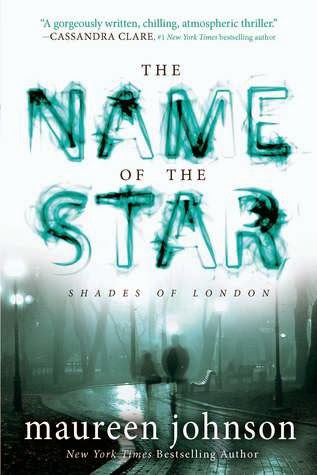 ——
Jack the Ripper is back, and he’s coming for Rory next…

Louisiana teenager Rory Deveaux arrives in London to start a new life at boarding school just as a series of brutal murders mimicking the horrific Jack the Ripper killing spree of more than a century ago has broken out across the city. The police are left with few leads and no witnesses. Except one. Rory spotted the man believed to be the prime suspect. But she is the only one who saw him—the only one who can see him. And now Rory has become his next target…unless she can tap her previously unknown abilities to turn the tables.
——
I should begin by saying that this is one of the single least helpful cover descriptions known to man and that the concluding sentence is particularly misleading. Apart from her newfound ability to see ghosts, Rory has no hitherto unknown abilities at this point. It is her innate bravery, sheer tenacity, and capacity for friendship (not to mention her association with the Shades, London’s ghost-fighting shadow police force of three that comprises the entire premise of the novel and is yet conspicuously absent from the summary) that gives her any hope of besting the killer. Also, can I just add that there is no way in hell you would know that The Name of the Star is a fantasy novel from this description? No wonder Barnes & Noble doesn’t shelve it with fantasy/sci-fi, they clearly have no idea what it is.

With that mini-rant out of the way, let’s get down to business. I have generally positive feelings about this book with a few caveats. To break this down, and because typing is quite painful at present, I’m going to revert to list form. So, without further ado—

*Rory. It’s alway nice to have a first person narrator who’s likable, considering you spend 100% of the novel in that person’s head. Rory is very much a teenager with teenage concerns, and while her concerns are miles away from mine when I was her age, I kind of loved that about her. Every once in a while Rory would have no idea why she was doing what she was doing and would mark it down to hormones, reminding me quite a bit of my sister and some of my friends in high school and college. Her internal dialogue frequently cracked me up, especially her colorful exposition. She’s painfully aware of her faults (she’s fervently believes she talks too much), but by and large her meandering digressions are endearing and humanizing, rather than annoying. Best of all, Rory is friendly, generally sensitive/open to others, and loyal as all hell, even to people she’s barely met. And brave. Stupidly brave? Maybe, but admirably so, all the same.

*The Concept: Undercover shadow police force that deals with London’s ghost problems and is comprised of misfit adolescents because the ability to see ghosts only manifests in people who have near-death experiences before the age of nineteen. Yep, that’ll do. Better still, the plot ties nicely into the history of the Shades and the nature of ghosts, moving the story forward while cleverly avoiding too many drawn-out exposition of the past.

*The fact that the near-death experience that grants Rory the ability to see ghosts was choking on a sausage in the dining hall because she tried to talk and eat at the same time. I’m not sure if I was supposed to find this as hilarious as I did, but I can’t help it. All the other Shades had these horribly traumatic backstories, and Rory essentially choked on a hot dog. Admittedly, everything that happens to her as a result of said choking is traumatic in a rather gruesome way, but the initial ordeal makes me laugh.

*The Boarding School Crew: Oddly, though I think we spend more page count with them than with the Shades, we don’t really get to know them as well. Even so, the glimpses of Rory’s roomie bonding with Jazza, her library encounters with Alistair, her struggles with snooty head girl Charlotte, and occasional interactions with quirky hallmates, help readers connect to the story and Rory’s world before she meets the Shades and consequently the plot.

*The Shades: As much fun as boarding school escapades can be, the arrival of the Shades, Boo, Callum and Stephen, heralded the A plot and the debut of they with whom I would be most intrigued for the remainder of the novel and presumably the series as a whole. I loved Boo, Callum and Stephen and actually wish Rory could have spent even more time with them than she did. We’ve only scratched the surface of getting to know these characters, and it is wanting to know more that most compels me to keep reading.

*The Tone: Anytime you’re dealing with a serial killer as flamboyant as the Ripper (or his copycats) and a group of protagonists whose supernatural abilities are gained through near-death experiences, the story is bound to get dark and gritty. But Rory’s narration is so humorous and breezy that she carries you through the bouts of darkness, allowing readers to feel the direness of her experiences without being overwhelmed by it.

*NO INSTA-LOVE. HOORAY! If there’s epic romance (and I’m 97% certain it’s building up to an epic romance) it’s taking its sweet time to get rolling, which is refreshing and perhaps indicates that Rory and her intended (who shall remain nameless, though his identity is blatantly obvious in the narrative) may actually get to know each other before they fall in love. Or so I hope.

*I’m all in favor of the slow-build and even more in favor of character-driven stories, but I found the Shades so much more compelling than 80% of everything else that was going on that I wish they’d made their debut earlier in the novel. On the other hand, I recognize that this is the first of a four book series and assume I will get to spend plenty of time with them in subsequent installments.

*Jerome: I liked Jerome, but I didn’t really feel like we got to know him, which may be by design considering Rory herself doesn’t seem entirely sure what she’s doing with him beyond that he’s a friend, he’s cute, and they’re both at the mercy of rampaging hormones. Now that I’ve written this, I’m not actually sure this qualifies as a critique.

*The overall feeling I was left with after finishing the book was that while it was enjoyable, the characters intriguing, the plot engrossing, and while I am more than willing to continue reading the series, there was nothing about it that screamed “extraordinary”. This is a good book, not a great book, and there’s nothing wrong with that—the world needs more good books like it. Still, I cannot but wonder if perhaps it suffers from overhype and my opinion would have been different had I just stumbled upon it on my own rather than heard it praised to the skies before it reached me.

Ultimately, The Name of the Star is a lot of fun and a good way to spend an afternoon. If it sounds as intriguing to you as it did to me, don’t dither over whether or not you should pick it up for six months like I did—just do it. I myself will be looking forward to future installments of the Shades of London, starting with my recently acquired copy of book two, The Madness Underneath.

Specs
Type: YA Urban Fantasy, Mystery
Acquisition: Personal purchase from Barnes and Noble.
Discovery: I’d been hearing rumblings about the book for a while, but what finally sold me were the illustrations of graphic artist Cassandra Jean on Tumblr.
Current Rank: Book that I enjoyed
Number of Reads: 1