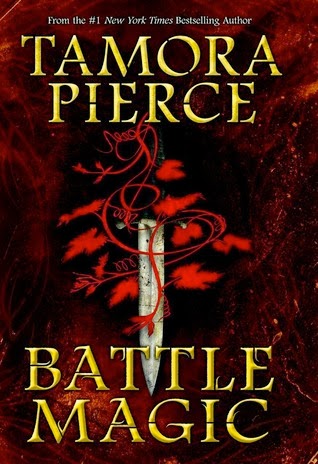 ——
On their way to the first Circle temple in Gyongxi, mages Briar, Rosethorn, and Evvy pay a visit to the emperor's summer palace. Although treated like royalty when they first arrive, the mages soon discover that the emperor plans to invade Gyongxi, posing a fatal threat to the home temple of the Living Circle religion. Accompanied by one of the emperor's prize captives, the three mages rush to Gyongxi to warn its citizens of the impending attack. With the imperials hot on their trail, Briar, Rosethorn, and Evvy must quickly help the country prepare for battle. But even with the help of new allies, will their combined forces be enough to fight the imperial army and win the war?
——
Tamora Pierce is one of my favorite fantasy authors of all time. Her Song of the Lioness and Immortals quartets fall into the rare category of “books that changed my life” and I have eagerly anticipated every publication since. While I have issues with the conclusion to the Beka Cooper trilogy and tend to prefer her Tortall books to Circle of Magic, I was excited to learn exactly what Briar, Rosethorn and Evvy got up to in Yanjing after all the allusions in Will of the Empress.

By and large, Battle Magic did not disappoint, reuniting readers with beloved characters and introducing them to a bevy of dynamic new faces I would not have been sorry to spend a great deal more time with (especially the God-King). As tightly and vividly written as ever, Pierce’s latest provided a gritty, unflinching rendering of the effects of war on people of all ages, but most especially teens and children like Briar and Evvy. Evvy’s plot line was heartbreaking but stark: Pierce does not try to temper the bleakness of the physical and psychological torments of war. She is never maudlin nor does she express useless platitudes to make readers feel better about what they have read. Neither are the tortures the characters endure overblown or dramatized. The narrative is unapologetically frank, and if that makes certain scenes painful to read, well, Pierce has done her job and done it well.

The trouble is that having read The Will of the Empress, in which Briar’s PTSD ultimately prompts him to divulge some of his experiences in the war to his foster sisters, I kept waiting for events that ultimately did not materialize in Battle Magic. Consequently, when the story reached its climax it felt…anticlimactic. I actually went back and reread Will of the Empress to make sure I wasn’t misremembering Briar’s account of the war.

The other aspect of Battle Magic that evoked mixed feelings was something that also bothered Briar: Rosethorn’s dalliance with Parahan. On an intellectual level, I agree with Rosethorn. Her relationship with Lark is the business of Rosethorn and Lark alone. If Lark doesn’t have a problem with Rosethorn occasionally bedding other people, then it is none of Briar’s, or any of their other charges’, concern. I can also see how Rosethorn, whose narration repeatedly returns to how much she misses Lark, would desire physical comfort and a distraction from the painful psychological toll of the war that rages around her.

Briar’s perspective resonates on an emotional level. I can equally see how he would feel uncomfortable with his guardian getting involved with someone who isn’t Lark, his other foster mother, even knowing that Lark and Rosethorn have an understanding. Of course, with Lark some thousands of miles away in Emelan, we have no way of knowing her side of things, and are forced to take Rosethorn and Briar at their word, though from what we’ve seen of Lark it seems safe to trust Rosethorn’s knowledge of her partner. With Lark absent, both Briar’s and Rosethorn’s perspectives were given credence in the narrative, and I applaud Pierce for providing such a nuanced take on Rosethorn’s relationships. That said, I wish it wasn’t the only bisexual character that we know of in the Circle books who was exploring open relationships, not because there is anything wrong with the practice, but because it inadvertently perpetuates the narrative that equates bisexuality with polyamory.

One of the misconceptions many bisexuals are forced to contend with in both the straight and LGBT communities is the idea that because a person is attracted to both genders, they must be unable to be contented with a single partner of either gender. Other misconceptions include but are not limited to: “Bisexuals are actually gay and just haven’t fully come out/come to grips with that fact” and “Don’t get involved with bisexual girls because they’re either A. Straight girls experimenting/trying to impress guys or B. Will ultimately end up leaving you for a guy.” All of these misconceptions tend to be supported in one way or another by depictions of bisexuality in the media. While television is the most visible perpetrator, literature is by no means guiltless. Of the novels I’ve read that feature prominent bisexual characters, I can think of only two who did not practice polyamory. This is not to say that other characterizations do not exist, simply that I have not come across them, and I actively seek genre fiction with an LGBTA bent.

Again, I have read every book Tamora Pierce has ever published, I have heard her speak in person, and I have followed her blog and her Tumblr long enough to be certain that she had no intention of perpetuating a stereotype. Tamora Pierce is one of the most fiercely vocal authors on the importance of inclusion and representation in fiction (nearly all of the characters in Battle Magic are PoC). Her aim in writing Rosethorn as she did was no doubt born of a desire to keep true to the character and perhaps to show that love, sex, and all that is bound up with them take many forms none of which invalidate or are invalidated by any of the others. And indeed, as I stated earlier, her depiction of Rosethorn’s relationship is nuanced, well-drawn and complex, as any such relationship would be if enacted in reality. The fault lies with the lack of diversity in the media’s portrayal of bisexuality. Had bisexual characters in television and literature reflected the truth that bisexuality manifests and is expressed in as many individual ways as any other sexuality (though let’s be honest, heterosexuality is the only one the media treats with a modicum of nuance and even that is questionable), then Rosethorn’s relationships would have garnered nothing but praise from me. With things as they stand, I cannot but feel torn.

Other readers will not perhaps feel as conflicted as I did about this admittedly minor plot point which in no way inhibits enjoyment of the novel as a whole. Similarly, those who did not read Will of the Empress may not split hairs over the denouement nor any discrepancies between events accounted therein and those depicted in Battle Magic. Many who have are equally likely to share this view. Because the fact remains that even with these quibbles (which will continue to haunt me), Battle Magic is another welcome addition to the Circle of Magic universe. I am, as ever, eager to see where Pierce takes us next.

Specs
Type: YA Fantasy
Acquisition: Personal purchase from Barnes and Noble on day of release.
Discovery: I’ve followed Tamora Pierce’s every publication since I first laid hands on Wild Magic. (Yes, that’s right, I read Wild Magic first, then the entire Song of the Lioness quartet, then Sandry’s Book, then the rest of The Immortals. Screwed up, I know, but I was twelve, the school library had limitations, and the B&N close enough to bike to was tiny and didn’t have the books the first three times I went.)
Current Rank: Book that I enjoyed
Number of Reads: 1 (Will be read again, as with everything Pierce has written, though not as many times as Song of the Lioness, The Immortals, or Protector of the Small.)