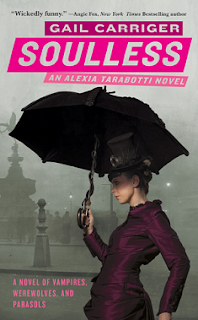 ——
Alexia Tarabotti is laboring under a great many social tribulations.  First, she has no soul.  Second, she’s a spinster whose father is both Italian and dead.  Third, she was rudely attacked by a vampire, breaking all standards of social etiquette.  Where to go from there?  From bad to worse apparently, for Alexia accidentally kills the vampire—and then the appalling Lord Maccon (loud, messy, gorgeous, and werewolf) is sent by Queen Victoria to investigate.  With unexpected vampires appearing and expected vampires disappearing, everyone seems to believe Alexia is responsible.  Can she figure out what is actually happening to London’s high society?  Will her soulless ability to negate supernatural powers prove useful or just plain embarrassing?  Finally, who is the real enemy, and do they have treacle tart?
——
**Warning: This review contains “spoilers” for the romantic plot line of this book. I say “spoilers” in quotation marks because frankly the outcome of the romance is a foregone conclusion—not only is it obvious from the outset, it is also stated on the back cover of the second book.  Nevertheless, if frank discussion of the romance falls under your definition of “spoilers” you should probably not read this review.  At least not beyond the second paragraph.**

Soulless, Carriger’s debut and first volume of the five-book Parasol Protectorate series, is set in the same alternate history as her most recent novel, Etiquette and Espionage, a Victorian London into whose society werewolves, vampires, and ghosts are fully integrated, .  It follows the exploits of one Alexia Tarabotti who is confident and outgoing in all regards save her willingness to believe anyone could love her, and quite a deft hand at concussing unsavory elements with a bronze-weighted parasol to boot.  Like Sophronia, the protagonist in Etiquette, Alexia is surrounded by her own cast of colorful characters (Alexia’s best friends—the endearingly flamboyant vampire, Lord Akeldama, and the fashion-challenged Ivy Hisselpenny with her penchant for terrible hats—and Lord Conall’s long-suffering beta, Professor Lyall, top the list)  and is possessed of a similar sardonic humor, but spends rather more time getting accidentally kidnapped during her explorations.

As with the later Etiquette, Carriger’s Soulless is brimming with witty dialogue and humorous narration, though it is clear that Soulless is an earlier work:  The prose is much tighter in Etiquette, and the plot of Soulless is a little scattershot.  In a similar vein, I am accustomed to reading novels set in times and places where one’s familiarity with another is expressed by the use of titles and personal or family names, but this is the first novel I’ve read wherein the narration was incapable of sticking with one name for the protagonist.  Alexia is referred to as “Alexia” and “Miss Tarabotti” in alternating sentences throughout the exposition.  The habit is slightly off-putting, but comparatively low-ranked in my concerns about the novel.  More worrisome is the way in which Alexia’s preternatural abilities function. While the concept of supernatural beings possessing an excess of soul while the much rarer preternaturals lack soul altogether was quite fascinating, and there is nothing inherently wrong with the idea that preternaturals like Alexia can negate supernaturals and render them temporarily human through physical contact, in practice it often boils down to this: Alexia’s touch has the ability to “tame” the literal and metaphorical beast that is her werewolf romantic interest, Lord Conall Maccon.  That said, her abilities are also used quite poignantly on behalf of her friend, Lord Akeldama, so to be fair I should perhaps reserve judgement until I’ve read the remaining four books in the series.

While Soulless is quite diverting and even made me laugh aloud on more than one occasion, I did not enjoy it as much as Etiquette and Espionage, in large part because unlike Etiquette, Soulless is half romance novel, and the way Alexia and Conall’s romance is handled made me uncomfortable.  I cringed every time the text referenced Lord Conall Maccon’s physicality (“his big, werewolf-sized body”) and felt physically ill at the number of times the words “violent” and “rough” are used to describe their amorous embraces (they have an uncanny talent for getting caught making out in ill-advised, overly public locales), not to mention the number of times Alexia is rendered limp and unyielding by his proprietary exploration of her body which nearly always begins with him grabbing her and trapping her hands in some way.  The way they lose all sense (not to mention the actual plot) around each other is explained away by Lord Maccon’s alpha werewolf nature and the proximity of the full moon, during which he loses control.  Alexia further takes pains to make it patently clear in most, though it must be said, not all, of her narration that she has no qualms with Lord Maccon taking advantage of her, but this is disturbing in and of itself.  There is, thankfully, only one sex scene in the novel and it is (mercifully) not very explicit, but it involves Alexia being stripped naked save for her boots while Lord Maccon, fully clothed with only the front of his pants undone, takes her virginity in a moving carriage despite her hesitation which she continues to express until he silences her with sensation, an all too common occurrence in this book.

I am well aware that this kind of romance will not bother everyone the way it bothered me, and in many cases may attract readers, but it leaves me with a sick feeling in my stomach.

I bought Soulless as part of a boxed set containing all five Parasol Protectorate novels. I don’t regret buying the full set and intend to keep reading because I retain hope that having taken care of the messy business of romance in book one, Alexia will be allowed to get on with the plot.  That said, I’m glad Etiquette and Espionage was my introduction to the writing and world of Gail Carriger: I’m not certain I would have picked it up had I read Soulless first.

Specs
Type: (Alternative) Historical Fantasy, Romance, First in a Series (Parasol Protectorate)
Acquisition: Personal purchase from Barnes & Noble
Discovery: Picked up because I loved Carriger’s YA novel, Etiquette and Espionage
Current Rank: Book I didn’t entirely care for and have complex feelings about
Number of Reads: 1 (I doubt I will reread this one.)

Second Opinion
The Book Smugglers
Beckoned by Books
Worlds Without End
Posted by Rachel at 8:52 AM