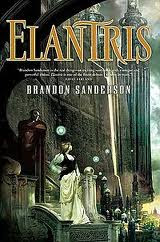 ——
Elantris was the capital of Arelon: gigantic, beautiful, literally radiant, filled with benevolent beings who used their powerful magical abilities for the benefit of all. Yet each of these demigods was once an ordinary person until touched by the mysterious transforming power of the Shaod. Ten years ago, without warning, the magic failed. Elantrians became wizened, leper-like, powerless creatures, and Elantris itself dark, filthy, and crumbling.

Arelon's new capital, Kae, crouches in the shadow of Elantris. Princess Sarene of Teod arrives for a marriage of state with Crown Prince Raoden, hoping -- based on their correspondence -- to also find love. She finds instead that Raoden has died and she is considered his widow. Both Teod and Arelon are under threat as the last remaining holdouts against the imperial ambitions of the ruthless religious fanatics of Fjordell. So Sarene decides to use her new status to counter the machinations of Hrathen, a Fjordell high priest who has come to Kae to convert Arelon and claim it for his emperor and his god.

But neither Sarene nor Hrathen suspect the truth about Prince Raoden. Stricken by the same curse that ruined Elantris, Raoden was secretly exiled by his father to the dark city. His struggle to help the wretches trapped there begins a series of events that will bring hope to Arelon, and perhaps reveal the secret of Elantris itself.
——

I will admit that I was initially hesitant to pick up this book when I realized that Brian Sanderson was the author they’d asked to step in and finish the Wheel of Time series after Robert Jordan’s death.*  My reticence was ridiculous for two reasons: First, it is unreasonable to hold one author (Sanderson) responsible for his predecessor’s work, nor is it reasonable to judge his writing by the way he writes characters and plots that are not his own. Secondly,  this is a damn good book. I thought no one wrote fantasy like this anymore. I was wrong.

Elantris had me from the first sentence: “Prince Raoden of Arelon awoke early that morning, completely unaware that he had been damned for all eternity.”  As far as opening lines go, that’s quite the hook.  The quality of the prose does not falter, and the novel does not fail to deliver on the promise of intrigue that colors that first paragraph.   The conceit of switching between three viewpoints worked surprisingly well and never detracted from the flow of the story thanks to little hints in the narrative that showed where the three plots intersected or overlapped. It helps that Sanderson’s characters, particularly his three protagonists, are excellent—complex, well-drawn, and well-developed. Both Raoden and Sarene are immensely likable.  It is easy to see how they draw the loyalty and love of those around them.  Sarene is a brilliant and crafty politician, Raoden compassionate to a fault, but neither is without fault or his/her fair share of personal demons.  I could speak at length of Raoden and Sarene’s relationship with each other (they were engaged before Raoden became an Elantrian and now that he is “dead” they are technically married), but to discuss their dynamic in depth would reveal too much of the plot.  I will say that the way their relationship was handled was fascinating and more emotionally realistic than many other fantasy couples in similar situations.  Their engagement was a political arrangement but one that was engineered by Sarene and Raoden themselves, rather than their parents, and both parties viewed their prospective union with personal as well as political hope.

The conquering priest Hrathen was obviously the least sympathetic of the three protagonists, yet he was also the most sympathetic “lunatic religious archetype” I’ve ever read because he is not, in fact, a lunatic. He is logical, he has a conscience, and he is capable of mercy. Moreover, he isn’t dissembling when he says he wants to save the country of Arelon.  At first, it seems as if he means “save” as in save the Arelons’ souls via conversion, but he actually means that he wants to save their lives: If he cannot convert them, they will all be killed by people less scrupulous than he has become.  The inclusion of Hrathen’s perspective adds an unusual layer of depth to the story.  It is not often that the antagonist (which is a reductive way to describe Hrathen) is also one of the protagonists.  There are aspects of his character arc that I greeted with skepticism, most notably his feelings for Sarene, but I cannot decide whether this is because they were genuinely underdeveloped deus ex machina, or if it is simply because Hrathen deliberately represses emotion and is a generally tight-lipped narrator even in his own mind.

I’ve heard this book repeatedly described as “twisty”—none of the characters are who they initially seem to be, nothing goes the way you think it will, and so on—but while the plot is dynamic, I did not find it to be unpredictable. Raoden’s solution to the AonDor problem and the mystery behind the Reod, the catastrophic event that destroyed Elantris and condemned the Elantrians to a living death, were painfully obvious.  That said, guessing the twists and revelations in advance did not in any way diminish the pleasure of watching them unfold.  I enjoyed the political machinations and Raoden’s struggle to essentially build a new society from the ground up, but while the descent into battle and mayhem is a relative eleventh hour blip in the greater scheme of the novel, I would have liked to see the story resolve itself without the threat of violence.  Still, Sanderson does an exceptional job juggling the varied strands of the plot and bringing them to a satisfying close.  There are still plot threads (the backstory of Sarene’s father and uncle for one) that are alluded to but never dealt with in enough detail to dispel lingering questions.  These unresolved minor plot threads leave you feeling as if Sanderson could revisit the world should he choose to, but it’s not necessary—the story is complete.

Sanderson is a popular fantasy author, and if the rest of novels are even half as good as Elantris it’s easy to see why.  His writing is tight, his characters emotionally complex, his dialogue delightful, and his world-building both thorough and imaginative.  I think the single most repeated praise of Elantris is that it is astonishingly good for a debut novel, but the qualifier “for a debut” is unnecessary: Elantris is a good book.  Period.

*I did not care for the Wheel of Time books.  One of my friends has likely been plotting my demise since 2006 for this very reason.
Posted by Rachel at 8:06 AM