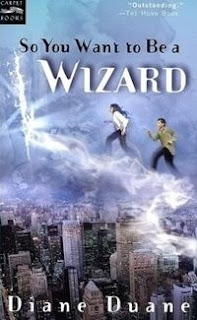 ——
Something stopped Nita’s hand as it ran along the bookshelf.  She looked and found that one of the books had a loose thread at the top of its spine.  It was one of those So You Want to Be a… books, a series on careers.  So You Want to Be a Pilot, and a Scientist…a Writer.  But this one said, So You Want to Be a Wizard.
I don’t believe this, Nita thought.  She shut the book and stood there, holding it in her hand, confused, amazed, suspicious—and delighted.  If it was a joke, it was a great one.  If it wasn’t…?
——

There is a conceit in the Young Wizards series that the wizard’s manual, disguised as a book called So You Want to Be a Wizard, only reveals itself when the reader is deemed ready.  I remember seeing these books on the shelves nearly every time I visited Borders when I was growing up and I always ignored them because I thought the title was silly.  Apparently I just wasn’t ready for them yet.

These books are like candy.  They go down easily, are gone too quickly, and once you start you don’t realize how many you’ve consumed until the whole bag (or in this case, shelf) is empty.

Since I’m reviewing an entire series rather than a single novel, there’s not much I can say regarding the plot that won’t spoil one volume or another, so I’ll focus on characters, writing, and world-building.

The world of Young Wizards is our own, but with a system of magic (naturally unknown to the general populace) that is more the stuff of science-fiction than fantasy.  Wizards are called for unknown purposes by the Powers that Be, and must take an oath and pass an ordeal (usually solving a problem that is the most immediate reason for their calling) in order to remain a wizard. Failure—and more often than is comforting, success—can result in death.  Wizardry is serious business with serious consequences and is governed by a system of rules and limitations.  There is always a price to be paid, in energy and in deeds, for spells.  You cannot exceed your power save for the risky “blank check” spells: But an unbalanced ledger won’t stay unbalanced for long, and the price paid for blank check spells is both dear and unpredictable. Readers’ knowledge of the world and wizardry expands alongside the protagonists’, and is as much a part of the plot as character growth and whatever extenuating conflict initiates said plot.

As much fun as Duane’s world is, these books would be nothing without its heroes, Nita and Kit, and prolific host of eccentric supporting characters, including meddlesome sisters, concerned but tolerant parents, wise and wise-cracking Senior Wizards, sentient white holes, aliens, whales, the Transcendent Pig, and one of the best dogs to grace the pages of a novel.  Though Nita’s narration makes up the larger percentage of the books, Nita and Kit are truly dual protagonists, sharing the burdens and privileges inherent therein.  They are both entirely lovable, but human: Neither one is beyond making mistakes, but they never fail to learn and grow from them—best of all, they are always there for each other along the way. Their friendship is the driving force of the novels, though their love for their families also plays a leading role.  Better still, Nita and Kit take turns saving each other or inspiring the other to save his/herself. Neither is passive, and the societal expectations of gender roles and relationship dynamics between friends of the opposite sex that are so often imposed by writers, readers, and publishers mean nothing to them.*  Discovering Nita and Kit and watching them grow over the course of the series is one of the joys of reading Young Wizards: To further discuss their personalities, their strengths and weaknesses, their interpersonal dynamic, would rob you of that pleasure.

Less likable is occasional protagonist Dairine , who serves as a constant foil for her older sister, Nita.  Dairine is unspeakably selfish, immature, and brimming with self-importance.  She’s smarter than Nita, though Nita’s intelligence is no small thing—it just happens that her sister is a genius and her best friend has skipped at least one grade—but Dairine is not wise.  Nita and Kit became wizards as a means of self-defense, a last-ditch attempt to save themselves from the bullies who beat them and made their lives a misery.  But while they have to fumble their way through their initiation, unsure if wizardry is real, they take their oath seriously and intuitively understand its import.  Dairine becomes a wizard because she can’t stand the idea of her sister being able to do something she cannot when Dairine is used to not only being able to do everything Nita can and more, but also being better at it.  She treats the wizard’s oath as a joke until it is almost too late.  Dairine’s personality improves with the modicum of maturity she gains over the course of Wizard’s Holiday and Wizards at War, though the shock of events in the latter causes her to regress somewhat in Wizard of Mars.  I am hopeful that her character will continue to mature, though I am glad that Nita and Kit are the main protagonists and Dairine-centric narration is (outside of High Wizardry, Holiday, and War) few and far between.

My only major problem with the books is the complete and utter lack of internal consistency regarding the timeline.  This is admittedly only relevant when someone makes conflicting statements about how much time has passed over the course of the novels or mentions how old a character is, but the two rarely match and after the first few times it starts to drive you crazy. The timeline is supposedly straightened out in the “New Millennium Editions”, ebook only revised editions with new material. So far books 1-7 have been re-released, with books 8-9 to follow in June and July of 2013.  I bought the whole series in the original, paperback form, so I can’t vouch for the consistency of the new timeline, but if consistency is what you seek and you don’t share my extreme aversion to ebooks, the New Millennium Editions might be the way to go.

Duane’s writing is solid, her ability to allow her characters to learn and grow, projecting deeper themes and messages without becoming didactic, admirable.  She does not shelter her characters from the world and is not afraid to tackle the problems we face in reality alongside the fantastical.  Her unflinching approach to these issues and themes heightens the nostalgia-quality of the novels: They are old-school (Duane began writing them in the 80s), and if there were more books like them these days, readers would be better off.**


*Kit goes through a brief phase in A Wizard of Mars where he is overly sensitive to the way his relationship with Nita is perceived, but there are extenuating circumstances. To say more would spoil the book.
**And I would not be half as starved for this breed of reading material as I am.
Posted by Rachel at 3:40 PM