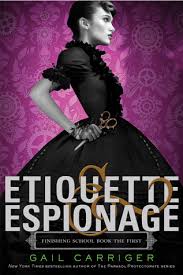 ——
Fourteen-year-old Sophronia is a great trial to her poor mother.  Sophronia is more interested in dismantling clocks and climbing trees than in proper manners—and the family can only hope that company never sees her atrocious curtsy.  Mrs. Temminnick is desperate for her daughter to become a proper lady.  So she enrolls Sophronia in Mademoiselle Geraldine’s Finishing Academy for Young Ladies of Quality.  But Sophronia soon realizes the school is not quite what her mother might have hoped.  At Mademoiselle Geraldine’s, young ladies learn to finish…everything.  Certainly, they learn the fine arts of dance, dress, and etiquette, but they also learn to deal out death, diversion, and espionage—in the politest possible ways, of course.  Sophronia and her friends are in for a rousing first year’s education.  Set in the same world as the Parasol Protectorate, this YA series debut is filled with all the saucy adventure and droll humor Gail Carriger’s legions of fans have come to adore.
——

This book is pure, unadulterated hilarity. It’s probably the fluffiest thing I’ve ever read, but I was so busy laughing I didn’t care one whit that it lacked the emotional depth and complexity I often look for in novels. But then, I also love books that don’t take themselves seriously and some of my all-time favorite narrative styles are those of Adams and Pratchett (I’m a sucker for British comedy and literary parody). I learned early on to never discount the deliberately irreverent: Celebrate it.

To that end, and because brevity is, in this case, most definitely the soul of wit, I present my review of Gail Carriger’s Etiquette and Espionage in bullet points.

Reasons I almost didn’t pick up this book:

1. The cover—I foolishly thought it was a romance novel. Someone needs to slap the publishing industry upside the head for deciding that just because a novel is written by a woman that it necessitates a female audience who naturally loves pink. What, I ask you, the bloody hell?  I can speak for no other female save myself, but I personally hate pink.*

2. Mentions of vampires and werewolves in descriptions and reviews. I’m really not into vampires and werewolves, though I make exceptions when they are not the novel’s “main attraction” (Mortal Instruments, Infernal Devices and Discworld).  I am particularly not into vampires or werewolves in books if the publishers are trying to package it as romance with a hot pink cover—I’m really, militantly not into romance. Or pink. Turns out this book was neither, but if I hadn’t looked beyond the cover I’d never have known that.

Reasons I picked it up anyway:

1. Title. Etiquette and Espionage? Academics devote a fair bit of time to concocting witty titles. I’m not sure if we do it to be clever, to entice other scholars to read our research, or simply because we find it diverting**, but whatever the reason it gives you a healthy appreciation for a good title.  This one has alliteration, alludes to Austen, and conjures fascinating imagery via juxtaposition—how could I not be intrigued?

2. Glowing recommendations from trusted sources: Lily, the friend who suggested I read Duane’s Young Wizards series, and Kristin Cashore, one of my favorite authors whose blog I read religiously.

3.  The dustcover description.  I knew about the aforementioned vampires and werewolves because I’d heard of Carriger’s adult series, the Parasol Protectorate, and Etiquette takes place in the same world—but neither supernatural species is mentioned in the description, nor was there any hint of romantic subplot, and these omissions gave me hope.

4. The chapter titles.  “Never Hurl Garlic Mash at a Man with a Crossbow”? “Keeping Proper Records and How to Steal Them”? “Breaking, Burgling, and a Proper Breakfast”? Enough said.

Reasons I couldn’t put it down:

1. Banter of both the witty and snarky variety.

2. Narration of the extremely snarky variety. Anything that recalls Douglas Adams or Terry Pratchett is more than worthy of a chance. Anything that makes me laugh almost as hard as The Confessions of Georgia Nicolson has already won me over.

3. Enterprising heroine with a motley crew of eccentric friends. From the moment she’s introduced climbing into a dumbwaiter to eavesdrop on her mother’s guests, Sophronia had my unconditional love (even in the few moments when she actually cares about her clothes). It’s rare I have the pleasure of reading about protagonists who are as klutzy and accident prone as I am.  Sophronia is curious, clever, and very nearly fearless, but her best attribute is her taste in friends. She adopts other misfits and outliers without hesitation, and doesn’t give a damn about propriety or social station. Her rapport with Soap, Vieve, Pill, and her circle of finishing school friends (Dimity, Sidheag, and Agatha) was probably the best part of the book. Sophronia and friends are accompanied by a cast of supporting characters who are both delightful and slightly mad—I don’t think there was a single character of import who lacked color, not even the villainous Monique.

4. Names. Not just character names, though those are often hilarious (there is a minor character called Lord Dingleproops and one named Mrs. Barnaclegoose), but also the names of the schools, lessons, objects, etc.  Some samples include Pill’s “Depraved Lens of Crispy Magnification”, as well as his having only attained “discourteous genius” level at Bunson’s, the school for evil geniuses he attends.

5. Tight prose, fast pacing, and the promise of more adventures to come.  This is a book without excess.  That may sound slightly absurd given the deliberately over-the-top nature of Sophronia’s adventures and acquaintances, but it’s true.  Carriger’s prose is concise and nothing happens without reason. You cannot stop reading once you’ve started because there is no natural “stopping point”—Etiquette never puts on the brakes because it never bothered to install them in the first place.  And because there’s no excess, it gets away with it.  This is a very slim novel and the only downside to that is wanting the next book right away.  Thank the gods it comes out in November.

Sometimes you just need a laugh.  Carriger’s Etiquette and Espionage has it in spades.  I’ll be standing outside the bookstore to buy book two, Curtsies and Conspiracies, the second the doors open on November 5th.  My sole concern? Deciding which to read first, Curtsies or Royal Airs, Sharon Shinn’s follow-up to Troubled Waters, which releases the same day.

*More than is probably reasonable. My aversion seems to be irrational.
**(I fall into the last category)