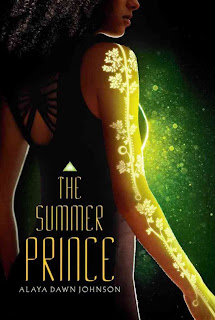 
The lush city of Palmares Tres shimmers with tech and tradition, with screaming gossip casters and practiced politicians.  In the midst of this vibrant metropolis, June Costa creates art that’s sure to make her legendary.  But her dreams of fame become something more when she meets Enki, the bold new Summer King.  The whole city falls in love with him (including June’s best friend, Gil).  But June sees more to Enki than amber eyes and a lethal samba.  She sees a fellow artist.  Together, they will stage explosive, dramatic projects that Palmares Tres will never forget.  They will add fuel to a growing rebellion against the government’s strict limits on new tech.  And June will fall deeply, unfortunately in love with Enki.  Because like all Summer Kings before him, Enki is destined to die.


Alaya Dawn Johnson's The Summer Prince is a contemporary work that evokes the quality of classic science fiction that the genre has lost in a quagmire of space operas and dystopic battle-royales. It posits a future that is easily imaginable given the state of contemporary technology and society, and explores the inherent dangers, not in technology itself, but in how humans might (mis)use it. Consequently it becomes a gripping analysis of human nature, life, power, and the sociopolitical workings of the world. A world that takes for granted the fluid nature of sexuality, explores the pitfalls of chasing immortality as well as the emotional fallout of assisted suicide, the convergence of ritual and technology, the balance of power and mutual disrespect between youth and extreme age, the illogic and fanatical power of human sacrifice: Summer Prince has it all.


Yet at its heart, The Summer Prince is the story of one girl's tumultuous journey towards maturity and her relationship with those she loves. June Costa is a girl with a mission, who wants to do what's right but is navigating the pitfalls and inherent narcissism that results from being a teenager. June is deeply reflective about the outside world, but is still learning how to be introspective, which leaves plenty of scope for personal growth throughout the novel. If Johnson hadn't written her questioning her own obsession with winning the Queen's Prize (a scholarship to the University that June competes for with other promising artists and musicians), it might have felt contrived: Her desire for the prize is completely irrational. But desire is irrational. June knows continuing to chase this prize after she's learned how corrupt Palmares Tres has become and her thirst for public recognition wanes, is illogical, but her inability to let go in spite of that is painfully realistic. Of the three central characters, June and Gil are often blinded by a life of privilege, while Enki can get so caught up in his personal revolution he forgets to be empathetic, trampling over the feelings of those who love him.  All three are prone to selfishness in different ways.  They are not always likable, in the same way that we do not always like our siblings, but they are deeply, painfully human, their voices and actions very much the adolescents they are meant to be, and though you may not always like them, you will grow to love them all the same.

June’s relationship with her family and the slow revelation of the events surrounding her father's death are among the most compelling parts of the novel. Her friendship with Gil is delightfully deep. Though they drift apart whenever they get caught up in their own personal nonsense, they always find their way back to each other. June's growing friendship with Enki is also strong, and despite June's descriptions of how he affects her physically, feels more like an intellectual love affair than a romance. They understand each other on a fundamental, even primal level, and their relationship is akin to two missiles on an inescapable collision course: When they hit the explosion will change the world.

Other reviews describe June’s relationship with Gil and Enki as a love triangle, yet calling it such feels reductive. While it might have been more interesting if sex hadn't entered into the equation on the Enki/June side, Johnson creates a complex, layered and deeply nuanced emotional relationship between these three characters that is immensely compelling. The love that holds it together is varied, allowing the novel to explore different kinds of love that are equally powerful and all-consuming. Johnson does not privilege any one variety of love over the others, though the Gil-June and June-Enki sides of the triangle are arguably more fully developed. June, the central and narrating character, is naturally more knowledgeable and concerned about her relationship with Gil and Enki than their relationship with each other. Still, Enki and Gil's love for one another captivates Palmares Tres and pervades the story, illuminated by Enki’s occasional interludes of narration—and for this reader, it is ultimately Gil’s fate that is most heartbreaking.

Another of the novel’s great strengths is its fascinating array of supporting characters, most notably the ever-surprising Bebel who steadfastly refuses to be relegated to the role of interfering mean girl or always perfect goody-two-shoes that would most likely have been her fate in the hands of another novelist (not to mention her initial role in June’s mind).  June’s mother and step-mother, the Tokyo ambassador Ueda-sama, even the computerized voice of the city itself, lend depth and heart to the novel, helping June on her path towards maturity and keeping her grounded when she’s most in danger of losing herself.

The writing is solid and lyrical, the world-building complex and well thought-out.  However, Johnson forgoes any hand-holding and plunges readers into Palmares Tres without explanation, allowing revelations about the world and the various concepts and conceits it introduces to unfold organically.  This instant-immersion method of exposition can be difficult for some readers to follow and tends to cause a polarized reaction—readers either love it or hate it, very few fall in the intervening spectrum.  I happened to be in the former camp, but many are in the latter so consider yourself forewarned.  On a similar note, as the novel is set in Brazil, it uses a sizable smattering of Portuguese to flavor the text.*  While the meaning of many of the words can be discerned from context, there is no glossary and very few are explicitly illuminated in the narration.  If not knowing the exact meaning of every word bothers you, you may find this a frustrating read.  I wasn’t bothered, save for one word that took me 3/4 of the novel to figure out, but again, it’s something to watch out for.

Though The Summer Prince’s take-no-prisoners approach to world-building might lose some readers, Johnson’s colorful and multi-dimensional cast of supporting characters, intriguing narrative structure, and vivid prose complete a novel that is as evocative (perhaps even provocative) as it is captivating. This is without a doubt her best novel to date.

Specs
Type: YA Science Fiction, Stand-alone
Acquisition: Text file of the penultimate draft received from the author during editing, later personal purchase from Barnes & Noble
Discovery: Friend of the author
Current Rank: Book I loved
Number of Reads: 2 (so far)

*I’ve read a handful of reviews that bemoan Johnson’s fall into the “sci-fi/fantasy trap of inventing languages” and would like to note that Portuguese is far from imaginary.
**You may note that there are more second opinions than usual. Given my personal relationship with the author (and the fact that I’ve yet to see two people interpret the novel the same way, not to mention the polarizing effect the novel’s content has had on readers) I thought you might benefit from a wider range of reviews. The last review in particular provides a counterbalance to the largely positive reviews the book has received.
Posted by Rachel at 4:41 PM