Review: The City in the Lake by Rachel Neumeier 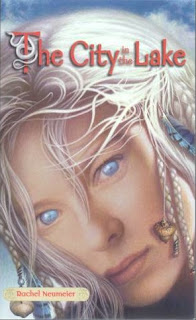 ———
Ever since the Prince disappeared, nothing has been right in the Kingdom.  Something has disturbed the strange, old magic that whispers around its borders…something cunning and powerful.  And the disturbance extends to the farthest reaches of the Kingdom, including the idyllic village where Timou is learning to be a mage under her father’s tutelage.  When Timou’s father disappears during a search for the Prince, Timou senses that the disturbance in the Kingdom is linked to her.  And so she must leave her village.  Even if it means confronting powers greater than her own.  Even if what she finds challenges everything she knows.  Even if it means leaving love behind.  This breathtaking novel spins a web of magic, bravery, and the power of love.
———

If ever a novel shouldn’t be judged for its cover it is Rachel Neumeier’s The City in the Lake.

I discovered The City in the Lake while scouring the internet for new reading material, frustrated by the eternal sameness of the local Barnes & Noble’s stock and desperate for the kind of old-school fantasy/sci-fi that is either no longer written or consistently overlooked by the powers that control bookstores’ inventory.  I doubt I would have picked it up had it not been for the review.  I was not particularly put off by the cover save for my sense of aesthetics which threw a tantrum and hid in the corner,  but I’d picked up another of Neumeier’s novels (The Floating Islands) a couple years ago, gave it my one chapter trial read, and discarded it on the grounds that I didn’t care for the writing or the characters.

My experience with The City in the Lake was quite the opposite.

Contrary to the misleading synopsis it sports on its back cover, The City in the Lake alternates between the perspectives of two main characters: Timou, whose story is outlined in the description, and Neill, also known as “the Bastard”, the illegitimate son of the king and elder brother to the missing prince, Cassiel.  The plot is well-executed, but predictable.*  The puzzle pieces are all on the table by the end of the third chapter and it does not take a great intuitive leap to imagine how they are to come together.  Nevertheless, Neumeier’s writing is so strong, her protagonists so emotionally complex, that it is a pleasure to watch each piece fall into place even if you’ve long discerned the final picture.  So it is not the plot, but the protagonists, Timou and Neill, who carry the novel.

Both Neill and Timou are compelling characters with strong narrative voices and both stand alone in their respective societies, singled out for their heritage, abilities, even their personalities.  Timou is the daughter of a mage training to follow in his footsteps in the small country village where he settled when she was an infant.  Though her father is respected by the village folk who are proud to boast of a mage in their midst, he is also feared.  And Timou, who is loved by the villagers as a child, becomes isolated as she comes into her power and grows increasingly like her father.  As the illegitimate son of the king, shunned by his father in favor of his younger brother who was born on the right side of the blanket, Neill is similarly ostracized.  It does not help that his demeanor, like Timou’s, makes him somewhat unapproachable.  Where Timou is abstracted, preoccupied with matters beyond the mundane, Neill has, whether by nature or necessity in a court which collectively refers to him as “the Bastard”, schooled himself to give away nothing of what he truly feels.  He keeps his counsel and allows the gossiping, often malignant court, to think the worst of him, though their suspicions regarding the king’s feared elder son’s intentions towards his younger brother could not be further from the truth.

The synopsis makes it sound as if the book’s conflict is on an epic scale, but while the antagonist is certainly powerful and the consequences of her actions far-reaching, the real conflict is personal and largely internal; at heart it is a story about family—it is just that the players happen to be in positions of power.  I could have done without Timou’s incipient romance, which mercifully takes a backseat to her journey of self-discovery and exploration of family that comprises the novel’s core.  The romance is carried out with a light touch, the seeds planted in the second chapter take their time to grow, and Neumeier deftly avoids any overt maudlin displays.  But the novel is so much more about Timou and Neill’s relationship with their families, about Cassiel, who acts as a catalyst and the resolution to their troubles, that Jonas and Timou’s fledgling attachment reads almost as a distracting afterthought.  It plays an important role in the denouement, removing the physical threat, but I cannot but wonder if there wasn’t another way to dispatch the antagonist, particularly given how divorced this particular solution is from the primary emotional/personal conflict that is so much more compelling and well-developed.  (If you have any doubts regarding Neumeier’s skill and subtlety when addressing her protagonists’ interiority, pay close attention to the moments when Neill stops thinking of himself as “the Bastard” and becomes Neill.)

The tone and lyricism of The City in the Lake lends it the quality of old-school fantasy that is sorely missing from so many recent offerings.  What’s more, Neumeier’s writing is reminiscent of Patricia McKillip, dreamlike and hauntingly evocative.  It is the writing as much as Timou and Neill that made me fall in love with this book.  I’ve purchased Neumeier’s adult Griffin Mage Trilogy largely on the strength of Neumeier’s prose, and if it lives up to the promise of its first chapter and The City in the Lake, I may be forced to give The Floating Islands a second chance.

If you prefer fast-paced action to introspection and lyrical exposition, this is not the book for you.  But if forays into the most readily available contemporary fantasy have left you feeling hollow and wanting, The City in the Lake may be just what you need.  It turned out to be exactly the kind of book I was looking for.

Specs:
Type: YA Fantasy, Stand-Alone
Acquisition: Purchased via Amazon (difficult to find in stores)
Discovery: Online reviews.
Current Ranking:  Borderline between book I liked and book I loved, leaning towards the latter.
Number of Reads: 2 (so far)

*I’m not sure whether the plot is predictable to everyone or if it’s just me.  I’ve read so many fantasy novels that I can usually figure out what’s going to happen in advance. I suppose I’m plot-jaded, but as long as I love the characters and the writing and the story is well executed, I never mind not being surprised by plot twists.
Posted by Rachel at 3:25 PM

Email ThisBlogThis!Share to TwitterShare to FacebookShare to Pinterest
Labels: Fantasy, Review, YA